The meeting was called to order at 9:14 a.m. by Vice President, Gayle Spear Cratty and by Patricia Royal Nicks, Treasurer.

Board and Classmates In attendance:

Current plans are to hold the reunion in Las Vegas (LV) next summer. VP Gayle Cratty will be visiting Las Vegas over Labor Day and will meet with Jim Kadlec ’68 to look at hotels. Jim K. has been in touch with Wade Gonzalez, Linda Buckles Brashear and Steve Sparshot. The Class of ’68 only had one proposal for their 50th reunion; Gayle Cratty will be assisting in these efforts. The following was discussed and will be taken into consideration,

A seven-day cruise out of Florida has been suggested. The group could leave on June 8, 2019 so that they would be at sea on June 9 – the anniversary of their graduation. It would cost $250 to hold on a room; amount is refundable. The following was discussed:

The following locations were discussed with Class Reps and Alumni from those years organizing their 50th reunions. There was great enthusiasm but it was stated that no one should undo any decisions made by those who are currently working on the 2018 reunion. It was noted that those planning the reunion need to be held accountable for staying within the budgeted amount. The following locations were discussed:

Glenn Imobersteg suggested Frankfurt as a reunion site as the school is to be torn down in the next year or two. Attendees could stay at Jack Trost’s hotel for approximately $80/night and go in May or October (Icelandic has R/T air for $600 with a total cost of about $1400/pp). Those dates keep attendees out of tourist season/prices. San Francisco and Alaska and/or Hawaii were also suggested.

Peggy has put together a list of all of the past reunion sites which Gayle Cratty has.

Class representatives need to contact 1970 and 1971 alumni to get their input.

Class Representatives: Gayle asked for a show of hands to help with Class Representatives as they will need to update directory information as the information is either incomplete or incorrect. Many entries are missing email addresses and/or telephone numbers. Those members listed below have offered to help going forward. They will be contacted on a conference call in the future. The willingness of the group to step up was met with much enthusiasm.

Proposals are to be left up to the class reps and those classmates working on the reunions being planned for the 50th reunions. Classmates feel strongly about this. The accountability will rest with the group planning the reunions and the Executive Board will provide oversight.

Vice President presented the highlights of Steve Gill’s proposal (see attached document) for the website design. Eric Thamm ’68 has offered to work with Steve on this project as this is his expertise with his former company and he has access to people who can assist. He has given his notes to Gayle Cratty; she will scan it and send it to Steve for review when he contacts her. A question was raised about Steve being more pro-active now that he is stateside. Some highlights from his proposal discussion points are as follow:

Steve will be back in the country soon. It was suggested he get with Bruce, who has done a wonderful job of maintaining the site.

Officers elected should do the work and be available via email, conference calls – do not change decisions already made.

Mike McCready brought up that we need to put the history on the website and keep it updated with Association business.

VP Cratty stressed that communication is key to keeping members of the association involved; that information/message needs to be disseminated. We need to bring back in those alumni that haven’t/don’t attend the reunions for one reason or the other.

The members present wanted to understand the full scope of the web redesign project, i.e. total costs, time line, etc. It was explained that research was still being conducted.

Steve Dean ‘67 noted that he and Tommy Heflin ’68 only had one person to talk to about the reunion; we need to have people who can make decisions. He felt that if he had known that we had that much money in the account, more could have been done for this reunion. Gayle agreed and said that the by-laws need to be examined and updated to handle these types of items. A recommendation will be discussed with the Executive Board and the general membership will be privy to what occurs.

Discussion followed on the decision-making process. Several members expressed concern that there has been a lack of attendance by Board members at some of the reunions. The feeling has voiced that those not in attendance should not have a say in what occurs in the future.

Publishing guidelines on how to put together reunions was requested. Bids for each reunion should be put on the website and then submitted to the Board for input and approval.

MOTION MADE: A motion was made that the officers and class representatives get copies of the by-laws and reunion guidelines, have a conference call discuss and then report back to the body of the Association.

Gayle Cratty thanked Tommy Heflin, Linda Dukor and Steve Dean for their work on the reunion and also to Mike McCready for his annual wine-tasting. She also recognized Ann Messier as our special faculty guest.

Linda Buckles Brashear asked the Board to find a way to update the Fallen Eagles section of the website. Betty House Weller thanked the group for all the cards and messages extended to Bill House – she said they really meant a lot to him. Bill Johnson recently passed away and we need the Fallen Eagle section on the website updated with his passing and other. 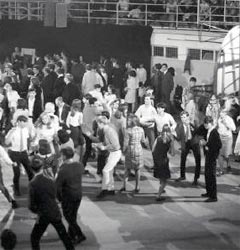